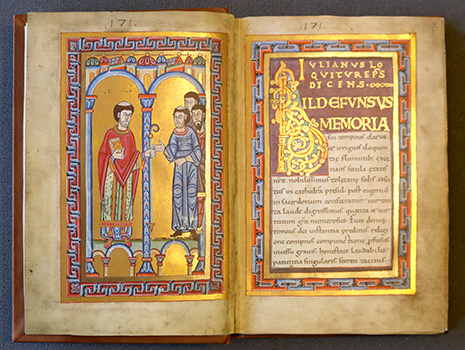 More than 125 facsimiles of manuscripts and printed books from the Middle Ages and Renaissance are available in LSU's Rare Book Collection. Most relate to religion.

Reproductions of printed books include the Gutenberg Bible (1455), the Cologne Bible (1478), the first printing of the King James Bible (1611), and The Antichrist and the Fifteen Signs, a fifteenth-century German block book with printed illustrations and handwritten text.

Manuscript facsimiles range from Bibles, books of hours, martyrologies, and commentaries, to collections of sacred music, guides for pilgrims, and works on church law. For a complete list, see the separate guide to Medieval & Renaissance Manuscript Facsimiles. In addition to facsimiles, the library owns one original medieval manuscript, a French book of hours from about 1450. Of related interest are several Ethiopian Bibles; although not medieval, their format and method of production is very similar to early European Christian manuscripts.

LSU's Rare Book Collection contains approximately 200 printed Bibles and related works that provide material not only for studying and teaching the history of religious beliefs, but also the rise of modern scholarship and publishing.

The earliest available items in this category are leaves from the Complutensian Polyglot Bible (1514-1517) and the Coverdale Bible (1535), the first Bible printed in English. The oldest complete text held is the New Testament (1582) of the Douai-Rheims Bible, published by English Catholics in France; also available is the first edition of the Douai-Rheims Old Testament, published in two volumes in 1609-1610. A mixed-edition copy (1612/1613) of the King James Bible in quarto format is held.

Other Bibles or related items of interest include:

Some Bibles have been collected partly as examples of fine printing and book design. These include:

Several dozen prayer books are held. Notable volumes include A Booke of Christian Prayers (1590), essentially a Protestant book of hours, featuring fine woodcut illustrations, including a Dance of Death sequence and portrait of Queen Elizabeth I. An Anglican Book of Common Prayer published by Robert Barker in 1615 is bound with an illustrated New Testament. A number of volumes feature ornamental bindings, most notably the 1693 and 1717 printings of the Book of Common Prayer and a Catholic missal, Paroissien Romain (1869), bound in ivory.

For examples of psalm books, see:

There are several early printings in the Rare Book Collection of works by St. Augustine. John Calvin’s The Mynde of the Godly and Excellent Lerned Man M. Ihon Caluyne (1548), the second of his works to appear in English, is an attack on French Protestants who avoided persecution by outwardly conforming to the Roman Catholic Church. Also held is a 1611 edition of Calvin’s Institution of Christian Religion. The Workes of Sir Thomas More (1557) includes writings related to More’s controversy with William Tyndale over the Protestant Reformation and Tyndale’s English translation of the Bible.

Two sermons by Martin Luther, published in 1534, on texts from the Gospels of Mark and Luke, are notable for having been printed during Luther’s lifetime. 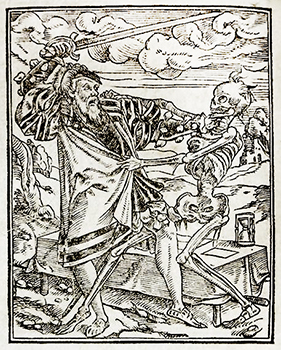 Imagines mortis (1555), a work on the universality of death, contains fifty-three Dance of Death woodcuts by Hans Holbein.

The Donald D. Eddy Collection of the works of eighteenth-century essayist John “Estimate” Brown and his contemporaries contains most of the writings of bishops William Warburton and Richard Hurd, as well as works by and about the controversial Scottish Jesuit Archibald Bower, author of The History of the Popes (1748-66).

The Rare Book and McIlhenny Natural History Collections contain works on “natural theology” or works otherwise related to religion and science. In fact, the library’s earliest printed work of theology is Compendium theologice veritatis (1489), by the natural philosopher St. Albert the Great. See also works such as: 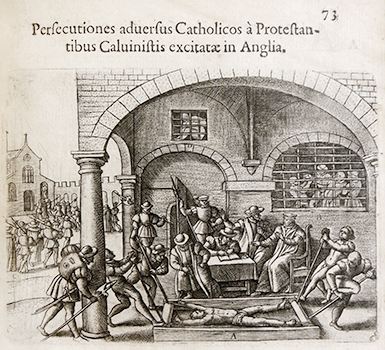 Several works are of interest for their illustrations, particularly those on Christian martyrs, which include:

Other works depict the Apocalypse, such as:

Jeremy Taylor, Antiquitates Christianae, or, The History of the Life and Death of the Holy Jesus (1703), is an example of an illustrated life of Christ. 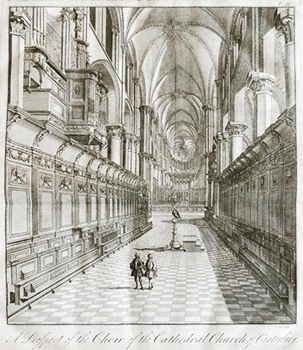 The library’s collection of works on European church history relates chiefly to the English Reformation. Most of the writings of Gilbert Burnet, author of The History of the Reformation of the Church of England, are available. Among other important works are John Foxe’s Actes and Monuments (or Book of Martyrs) (1610); John Jewel’s A Defense of the Apologie of the Churche of Englande (1571); Daniel Featley, The Dippers Dipt (1660), an attack on the Anabaptists; and Bede’s The History of the Church of Englande (1565). (A Latin edition of Bede’s work, dated 1601, is from the library of Sir Thomas Tresham, a leading English Catholic and father of Gunpowder Plot conspirator Francis Tresham.) Several works relate to the persecution of the Quakers, such as To the King and both Houses of Parliament, the Suffering Condition of the Peaceable People, Called Quakers (1685), an appeal for religious toleration.

Works on the history of English cathedrals and other church antiquities include:

Important works in the Rare Book Collection related to American church history include:

For works on religion and slavery, see the separate subject guide on the History of Slavery.

Accounts of various Jesuit missionaries in Asia, Africa, and the Americas are available. Examples include Choix des lettres édifiantes (1808) and its continuation Lettres édifiantes et curieuses (1819), which contain reports of Jesuit missionaries from the sixteenth through eighteenth centuries. Selected letters were translated into English as The Travels of Several Learned Missioners of the Society of Jesus (1714) and Travels of the Jesuits, into Various Parts of the World (1762).

España sagrada (1747-1879) is a chronicle of church history in Spain and Latin America, with much information on Jesuit missionaries. Another long serial run, Annales de la propagation de la foi (1827-1920) reports on French Catholic overseas missionary work. Reports of the American and Foreign Christian Union (1850-55) are available, along with biographies and memoirs of American Protestant missionaries from colonial times through the nineteenth century. 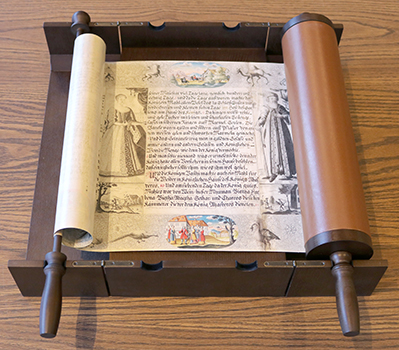 A small collection of Jewish manuscript facsimiles is available, including:

An example of early Hebrew printing may be found in Pages from the Past, a collection of leaves assembled to trace the history of printing. It contains a leaf from the Hebrew Pentateuch printed by Pierre de la Rovière in Geneva in 1617-18 (see set 1, port. 3, no. 78). Of related interest is Johann Lund’s Die alten jüdischen Heiligthümer (1711), an illustrated work on ancient Jewish customs and rituals.

Materials related to Islam are limited at present, but include high-quality facsimiles of the Qur'an of Sultan Muley Zaidan, written in Morocco in 1599, and the Book of Felicity, a sixteenth-century illuminated manuscript on the signs of the zodiac, made for Ottoman Sultan Murad III.

Also available is André du Ryer’s The Alcoran of Mahomet (1649), the first translation of the Qur'an into English; and an 1836 printing of George Sale’s Koran (1734), the translation owned by Thomas Jefferson. The Pages from the Past collection mentioned above also contains an undated leaf from a Persian manuscript of the Qur'an (see set 1, port. 3, no. 92).