Print culture played a key role in the exchange of political and social ideas in Europe during the French Revolution. The Rare Book Collection contains many original examples of such works. In addition to supporting research, they are useful teaching tools for courses on the history of this period.

Works by major political philosophers of the French Enlightenment are well represented. See, for example:

The rise of revolutionary government is chronicled in the proceedings of the Estates General and National Assembly, published as Ouverture des États-généraux (1791) and Procès-verbal de l'Assemblée nationale (22 vols., 1789-91). A collection of contemporary documents by Antoine Jeudy Du Gour pertaining to the trial of Louis XVI is available. A related item, Trial and Execution of the French King (1793), describes Louis’s final days, as does A Journal of Occurrences at the Temple During the Confinement of Louis XVI (1798), an eyewitness account by the king’s valet, translated for English readers.

Two highlights of the library's collections are:

Though they predate the Revolution, Linguet’s Memoirs of the Bastille (1783) and Renneville’s L’Inquisition françoise, ou l’histoire de la Bastille (1724) provide a sense of the Bastille’s reputation. The latter contains many engravings. Of related interest is an original manuscript from 1665, signed by Louis XIV, sentencing a prisoner to the Bastille.

British reactions to the French Revolution were both pro- and anti-revolutionary. For examples of such publications, see:

Visual materials of special interest include:

Works on the revolution’s impact on religion include the Baron d’Holbach’s La contagion sacrée (1797) and Sylvain Maréchal’s Pour et contre la Bible (1801). Among other examples are two sermons by French refugee clergy in England:  Letter of the Right Reverend John Francis de La Marche, Bishop of Leon and The Good Samaritan; or, Charity to Strangers Recommended. Bound together with these pamphlets is An Account of the Manner in which the Persons Confined in the Prisons of Paris were Tried and Put to Death on the 2d and 3d of September 1792. It describes the massacre of Roman Catholic priests.

For examples of biographical compendiums, see: 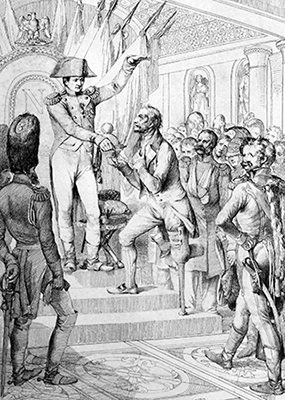 arious memoirs of Napoleon’s campaigns in Russia and Spain are held. Memoires d’une contemporaine (1827-28) was written by Ida Saint-Elme, a Dutch actress and mistress of Marshal Ney, who traveled extensively throughout Europe with the French armies.

Napoleon’s life in exile is documented by works such as Las Cases’s Memoirs (1818) and Henry Aston Barker’s A Short Description of the Island of Elba and Town of Porto-Ferrajo (1815). Accounts of the emperor’s final years by two of his personal physicians, Barry O’Meara and Francesco Antommarchi, are also available.

One of the treasures of the Rare Book Collection is the Description de l'Égypte (1809-28), a record of the French scientific expedition that accompanied Napoleon to Egypt in 1798. Related items include Relation des campagnes du Général Bonaparte en Égypte et en Syrie (1800), a memoir by Napoleon’s Chief of Staff, Louis-Alexandre Berthier; several editions of Copies of Letters from the Army of General Bonaparte in Egypt (1798-99); and Thomas Walsh’s Journal of the Late Campaign in Egypt (1803), which includes many colored engravings.

The library’s Rare Book Collection houses a small but significant collection of materials related to the Franco-Prussian War of 1870-71 and the ensuing period of working-class rule known as the Paris Commune. Together, these events were one of the most important political episodes of their time, paving the way to Germany’s unification and rise as a military power and bolstering the cause of Marxists, anarchists, and other Leftist groups throughout Europe. 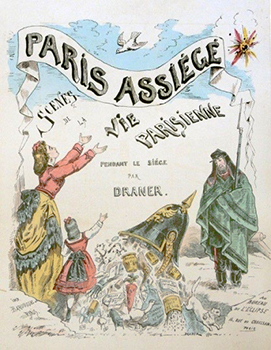 Three illustrated periodicals, Le Sifflet, La Scie, and L’Esprit Follet, are of interest for their political cartoons and caricatures. The Graphic, a British illustrated weekly newspaper, devoted much attention to events in France and is a rich source of images.

An even greater treasure trove of graphic art from this time period is a six-volume set of cartoons and caricatures related to the Franco-Prussian War and Paris Commune, assembled by the London bookseller Frederic Justen (1832-1906). Although related to sets of prints at other libraries, including the British Library and Heidelberg University, LSU’s set is unique. Four volumes contain works by French artists and are gathered under the title Collection de caricatures et de charges pour servir à l'histoire de la guerre et de la Révolution de 1870-1871.  An additional two volumes, containing mostly German prints, bear the hand-drawn title page De Berlin à Paris: A Collection of Prints, Sketches, Caricatures, &c., Formed in Berlin during the Period of the Franco-German War, 1870-71.

Justen also compiled three volumes of newspaper clippings on Napoleon III, titled Napoléon III devant la press contemporaine en 1873. The clippings in volumes one and two are from British and French newspapers; those in volume three are from other European countries, the United States, and Turkey.

A large volume of broadsides appears to have been assembled by Justen as well. It contains official declarations and orders of the Central Committee of the National Guard and lists of prisoners of the Commune.