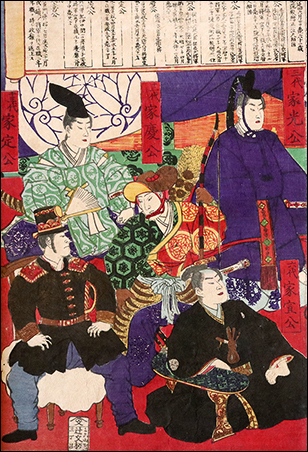 The LSU Libraries' Special Collections contains a small number of Japanese illustrated books, prints, and other related materials from the Edo and Meiji periods (1603-1912). The collection, much of which was acquired in 2015, is intended to support the teaching of Asian art and history, as well as the global history of books, printing, and graphic design. These materials were featured in a 2016 main gallery exhibition, "A Voyage to the Floating World: Japanese Illustrated Books and East-West Cultural Exchange in the Nineteenth Century." A complete exhibition checklist is available on request.

Good examples of Japanese illustrated books in the library's collection include:

Kasuga Gongen Genki emaki is a reproduction of a large picture-scroll, completed in 1309, telling the stories of miraculous events related to the Kasuga shrine and Kofukuji temple in Nara, one of the most ancient cities in Japan.

Early works by Japanese photographers include:

Also available are materials related to cultural exchange between Japanese and Western artists and designers in the late nineteenth century. Two historically important art journals in this area are:

Of related interest are early writings on Japanese art by European art critics and dealers: