The bulk of the library’s collection of philological materials is from the collection of David S. Blondheim (1884-1934), a specialist in medieval French who taught at Johns Hopkins University. In 1935, LSU purchased a portion of Blondheim’s library (2,600 titles) from his widow, Eleanor Lansing Dulles, a member of an influential family of American statesmen. At the time of its acquisition, the collection was one of the most comprehensive of its kind in the United States and perhaps in the world. Containing approximately one thousand dictionaries, it is especially rich in dialect dictionaries, which are virtually complete for France and Italy. French dictionaries include works on the dialects of Switzerland and Belgium as well as the patois of Canada, Louisiana, and Mauritius. Early scholarly editions of medieval French poetry and prose form the remainder of the collection.

Most of the Blondheim library remains in the LSU Library circulating collection. All pre-1800 titles and selected later works have been transferred to the Rare Book Collection in Hill Memorial Library.

Holdings of early French dictionaries include such key works as:

Italian works are relatively small in number and apart from dialect dictionaries are limited to works on etymology by authors such as Gilles Ménage and Ottavio Ferrari. There are several Italian-French, Italian-Spanish, and Italian-Latin dictionaries dating from the seventeenth and eighteenth centuries.

English and Other Languages 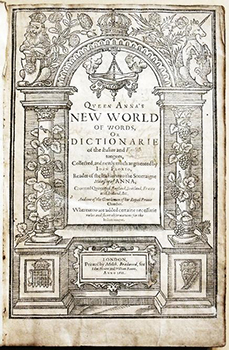 Supplementing the Blondheim Collection are miscellaneous materials collected over the course of LSU’s history. The earliest available English dictionary is Thomas Cooper’s Thesaurus linguae Romanae et Britannicae (1584), an expansion of Sir Thomas Elyot’s Latin-English dictionary of 1538. Queen Anna’s New World of Words (1611) was first published in 1598 as A Worlde of Wordes by John Florio, a royal language tutor who sought to refine English by importing words from Italian. (This work is also one of the earliest Italian dictionaries; a 1688 edition of it is held.)  A related work, Thomas Blount’s Glossographia (1681), is an example of the “hard word” lists of the seventeenth century. Other English-language items of note include:

Many specialized dictionaries are available on topics ranging from flora and fauna to sports, sailing, music, and cooking. The McIlhenny Natural History Collection contains more than fifty scientific dictionaries from the seventeenth century to the present. Two notable items are Philipp Andreas Nemnich’s Allgemeines Polyglotten-Lexicon der Naturgeschichte (1793-98), with definitions of scientific terms in more than a dozen languages, and the Nouveau dictionnaire d’histoire naturelle (1803-04).

The library also holds a number of miscellaneous works that may provide material for teaching and/or original research. Examples of such works are:

Limiting your advanced search in the catalog to Special Collections and entering "dictionaries" as subject keyword should locate most of the library’s holdings.

You may also wish to limit your search to a specific language or collection and search by keyword using terms such as "dictionnaire," "glossaire," "vocabolario," etc. An alternative is to use the "wildcard" search feature. By truncating the ending of a search term with the $ sign, you will increase your search results. For example, the keyword or title search "diction$" will locate records containing the words "dictionary," "dictionnaire," "dictionarium," etc.

You may also search using the term "Blondheim," but be aware that Blondheim's ownership has not been consistently noted in catalog records. Catalogue of the Library of the Late David S. Blondheim lists books offered for sale by his estate in 1935. Despite inaccuracies, it gives some idea of the collection's scope and history.