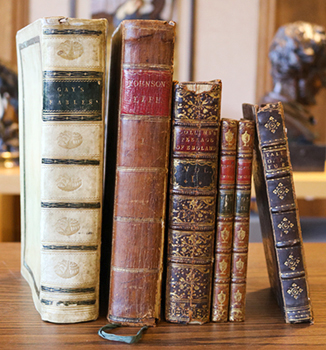 Eighteenth-century Britain made important contributions to the rise of the modern publishing industry. It also saw the birth of writing as a full-time profession and the development of many of the literary genres and types of publications that are familiar today, such as novels and magazines. The LSU Libraries' Rare Book Collection, in addition to supporting research, contains many original examples of eighteenth-century publications that can be used as teaching aids for courses related to this time period.

Listed here are the most notable or representative items in the collection. Many other works, including variant editions, are available. To learn more or to inquire about materials not listed, please explore the LSU Libraries' catalog or contact the Curator of Books.

The core of the library's holdings of eighteenth-century British literature was acquired in the 1930s and 1940s, a period of growth for LSU’s English Department. Additions were made between 1979 and 1986, when the North American team of the Eighteenth Century Short Title Catalogue, under the direction of Dr. Henry L. Snyder, was based at LSU. Many works by minor figures and people previously excluded from the literary canon were acquired at that time, with the intention of providing materials for original research as well as context for more well-known figures.

A current collecting focus are materials that support the teaching of eighteenth-century literary history. Works by women writers are also being acquired. A major addition came in 2005 with the purchase of a collection of the works of essayist John “Estimate” Brown from bibliographer Donald D. Eddy of Cornell University. Before Eddy's death in 2009, he also donated to LSU his collection of works by and about Richard Hurd and Archibald Bower.

Examples of all of the major genres of eighteenth-century fiction are available.

First editions of Henry Fielding’s Tom Jones (1749), Tobias Smollett’s Peregrine Pickle (1751) and Humphry Clinker (1771), and Richard Graves’ The Spiritual Quixote (1774) are some of the more well-known picaresque novels in the collection.

Epistolary novels include Samuel Richardson’s The History of Sir Charles Grandison (1753) and Fanny Burney’s Evelina (1784). First editions of Burney’s Cecilia (1782) and Camilla (1796) are also held. Henry Mackenzie’s The Man of Feeling (1771), perhaps the most influential sentimental novel of the eighteenth century, is available. In addition to a second edition, the collection contains a rare English-French edition of Oliver Goldsmith’s The Vicar of Wakefield, published in Revolutionary Paris.

Laurence Sterne's Tristram Shandy (1760-67) is one of the most important works in the collection. In addition to its literary innovations, it is also a satire on the excesses of eighteenth-century publishing and authorship.

Daniel Defoe’s The Consolidator: or, Memoirs of Sundry Transactions from the World in the Moon (1705), Delarivier Manley’s The New Atalantis (1720), and Eliza Haywood’s Memoirs of a Certain Island Adjacent to the Kingdom of Utopia (1725) are examples of the use of fantasy as political satire. A later work of fantasy, Charles Johnstone’s Chrysal, or The Adventures of a Guinea (1760), is the most famous eighteenth-century “speaking object” novel.

Samuel Johnson’s Rasselas, The Prince of Abissinia (1759), its sequel Dinarbas (1790) by Ellis Cornelia Knight, and Frances Sheridan’s The History of Nourjahad (1767) are examples of oriental tales.

The Gothic novel is represented by works such as Thomas Leland’s Longsword, Earl of Salisbury (1762), Clara Reeve’s The Old English Baron (1787), and Ann Radcliffe’s The Romance of the Forest (1794). The collection also includes two rare Gothic novels, Anna Maria Mackenzie’s Slavery: or, The Times (1792) and Sophia Lee’s The Two Emily's (1798).

John Aikin’s Miscellaneous Pieces, in Prose (1775) contains Sir Bertrand, A Fragment, an important early contribution to the Gothic genre, as well as his sister Anna Laetitia Barbauld’s essay “On the Pleasure Derived from Objects of Terror.” Of related interest are travel accounts and works on the picturesque and sublime that provided details and inspiration for writers of Gothic fiction, such as Henry Swinburne’s Travels in the Two Sicilies (1783-86) and William Gilpin’s Observations on the River Wye (1782). 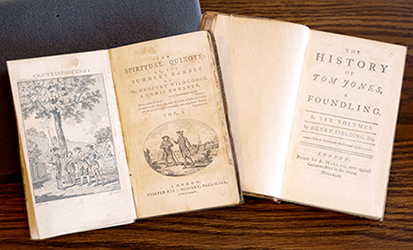 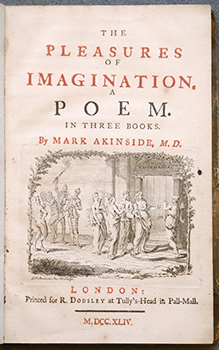 The library’s collection of poetry ranges from canonical works such as Matthew Prior’s Poems on Several Occasions (1709) and Mark Akenside’s The Pleasures of Imagination (1744) to curiosities like William King’s The Art of Cookery (1708) and collections of poetry in English dialects. Various editions are available of the works of most of the leading poets of the era; much of the collection, however, consists of works by minor figures.

Women poets are well represented. Miscellany Poems, on Several Occasions (1713) by Anne Finch, Countess of Winchilsea, is an important work from early in the century. Among later works are Elizabeth Thomas, The Metamorphoses of the Town (1731); Mary Chandler, The Description of Bath (1736); and Elizabeth Singer Rowe, Miscellaneous Works (1750). Ann Yearsley, author of Poems on Several Occasions (1786), was one of the first working-class women to forge a career as a poet.

Women’s emergence into the public sphere is also reflected in works such as Anna Letitia Barbauld’s Poems (1774) and Works (1826). Poetry by Anne Steele, Jane Bowdler, and Frances Madan Cowper is chiefly religious in nature. Although not written by a woman, a related item of interest is Edward Moore’s Fables for the Female Sex (1749).

Among works by the “graveyard” poets are Thomas Parnell’s Poems on Several Occasions (1726), containing “A Night-Piece on Death,” considered the first Gothic poem. Edward Young’s Night Thoughts (1756) and Thomas Gray’s Odes (1757) are other landmarks of the genre. LSU’s copy of Poems by Mr. Gray (1768) belonged to the Irish playwright Alicia Le Fanu and later to her grandson, the Victorian writer of Gothic mystery novels Sheridan Le Fanu. Other poets of this school whose works have been collected include Thomas Percy, William Collins, Oliver Goldsmith, and William Mason.

Two of English literature’s most famous “forgeries” are available: James Macpherson’s Works of Ossian (1765) and Thomas Chatterton’s Poems (1778). Other examples of Gothic or pre-Romantic poetry are James Beattie’s The Minstrel (1774), Edward Jerningham’s The Funeral of Arabert, Monk of La Trappe (1771), Sir Eldred of the Bower (1776) by Hannah More, and Charlotte Smith’s Elegiac Sonnets (1800).

Sir William Jones’s Poems, Consisting Chiefly of Translations from the Asiatick Languages (1777), is a source for the study of the impact of eastern literary traditions on the development of English poetry.

Political poetry spans the entire century, from Daniel Defoe’s The True-Born Englishman (1701) and Jure Divino (1706) to Poetry of the Anti-Jacobin (1801), an anthology of verse originally published in George Canning’s newspaper The Anti-Jacobin, or Weekly Examiner.

Major Scottish poets represented include Allan Ramsay, James Thomson, William Wilkie, and Robert Burns. Anthologies of ballads and drinking songs compiled by Thomas Warton, Joseph Ritson, and Thomas Evans are a rich source of Scottish as well as English verse. More general poetry anthologies include the 1790 new edition of Samuel Johnson’s The Works of the English Poets (75 vols., 1790) and a later supplement, The Works of the British Poets (13 vols., 1792-95), by Robert Anderson, containing verses by more than 100 additional poets.

The collection’s most notable Augustan-era play is the 1713 first edition of Joseph Addison’s Cato. Nicholas Rowe, Thomas Southerne, William Wycherley, and Colley Cibber are among other early-eighteenth-century playwrights whose works are available.

The collection is strongest in plays from the second half of the eighteenth century, with works by David Garrick, Richard Cumberland, John O’Keeffe, and Elizabeth Inchbald, in addition to dozens of minor figures. 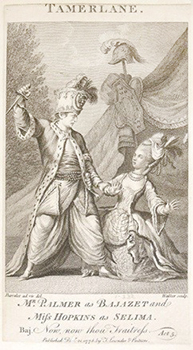 One bound volume contains plays with an oriental setting, including John Hughes’s The Siege of Damascus (1720), David Mallet’s Mustapha (1739), and James Miller’s Mahomet the Impostor (1745). Similar works are Thomas Whincop’s Scanderbeg (1747) and Sir William Jones’s translation of Sacontalá; or, The Fatal Ring (1792), by Kalidasa, “the Shakespeare of India.”

Eighteenth-century editions of the works of Shakespeare and his contemporaries form an important part of the collection, reflecting that era’s renewed interest in Elizabethan drama. Several adaptations and imitations of Shakespeare are available, including William Henry Ireland’s famous Shakespeare forgeries, published in 1796 as Miscellaneous Papers and Legal Instruments under the Hand and Seal of William Shakspeare.

Memoirs of actors and playwrights include classics such as An Apology for the Life of Mr. Colley Cibber (1740) and David Garrick’s Memoirs (1780). Less well known is A Narrative of the Life of Mrs. Charlotte Charke (1755), Cibber’s daughter and a noted transvestite. Other works about women of the stage include An Apology for the Life of George Anne Bellamy (1786), Alicia Le Fanu’s Memoirs of the Life and Writings of Mrs. Frances Sheridan (1824), and a Life of Mrs. Siddons (1834).

Works on the immorality of the theater include The Stage Condemn’d (1698), A Short View of the Immorality and Profaneness of the English Stage (1698), and Arthur Bedford’s A Serious Remonstrance in Behalf of the Christian Religion (1719).

Of primary importance in the field of essays is the Donald D. Eddy Collection of John “Estimate” Brown and his contemporaries. Best known for his satire Estimate of the Manners and Principles of the Times (1757-58), Brown wrote philosophical essays on miscellaneous subjects, as well as dialogues, sermons, plays, and poetry. Most notable among the works of his contemporaries are those of bishops William Warburton and Richard Hurd, whose Letters on Chivalry and Romance (1762) influenced the early Romantic movement.

Complete runs of the influential cofffee-shop periodicals The Tatler (1709-11), The Spectator (1711-12), and The Guardian (1713) include essays by Richard Steele, Joseph Addison, and Jonathan Swift. Among other works by Swift are first editions of A Tale of a Tub (1704), A Meditation Upon a Broom-Stick (1710), and Miscellanies in Prose and Verse (1711). An early collected edition of Swift’s works (7 vols., 1737) contains his “A Modest Proposal.”

Highlights include Lord Chesterfield’s Letters (1774) and Hester Lynch Piozzi’s Letters to and from the Late Samuel Johnson (1788).

Mary Wortley Montagu’s Letters (1763-67) contains her letters from Turkey, which are among the first observations by a European woman about the Muslim world. Other collections of literary correspondence by women are Fanny Burney’s Diary and Letters of Madame D’Arblay (7 vols., 1846-48), collected after Burney’s death, and Hugh Blair’s edition of the Letters of Anna Seward (1811).

Elizabeth Singer Rowe’s fictional Friendship in Death: In Twenty Letters from the Dead to the Living (1728) was one of the most republished books of the eighteenth century.

Horace Walpole’s correspondence constitutes one volume of his Works (5 vols., 1798). Another highlight of the collection is Letters of the Late Ignatius Sancho (1782), a black composer, actor, and “man of letters” whom opponents of the slave trade admired as a symbol of the humanity of Africans. 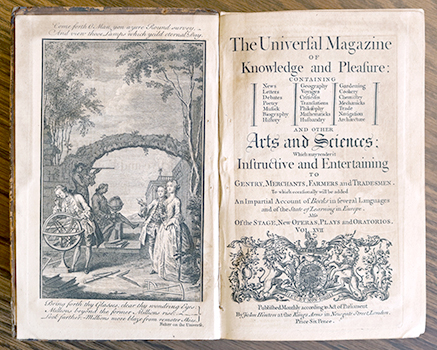 In addition to topical essays, long runs of eighteenth-century periodicals such as the Gentleman’s Magazine (1731-1833), London Magazine (1740-79), and Universal Magazine (1747-57) are sources of poetry, fiction, and biographical sketches of literary figures.

The Monthly Review (1790-1817), established in 1749, was the first periodical in England to review new works of literature.

Selections and reviews of Scottish and Irish literature may be found the Scots Magazine (1739-1802) and Hibernian Magazine (1775-1811). The Mirror (1786) and its continuation, The Lounger (1794), contain essays and reviews by Scottish writer Henry Mackenzie. 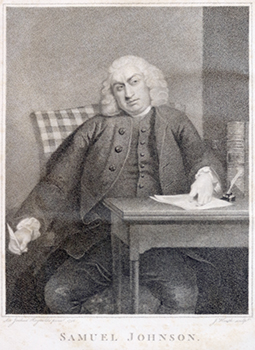 In addition to classics such as James Boswell’s Life of Samuel Johnson (1791) and An Apology for the Life of Mr. Colley Cibber (1740), the Rare Book Collection contains many other literary biographies.

David Rivers’ Literary Memoirs of Living Authors of Great Britain (1798) covers the latter half of the eighteenth century and consists of brief profiles of approximately 500 mostly obscure writers, including translators and journalists.

Subject headings denoting literary genres are rarely provided in catalog records, which can make searching for literature in the library’s catalog difficult. We recommend limiting your search to the Rare Book Collection as a location, entering a range of publication dates (e.g., 1750-1790), limiting the language to English, and using the “wildcard” search feature. By truncating the ending of a search term with the $ sign, you will increase your search results. For example, the keyword or title search “poe$” will locate records containing the words poem, poems, poetry, poet, poets, etc.

You may also try a call number search, but beware that because of irregularities of formatting, some call numbers may file out of order. Also note that the Rare Book Collection has been cataloged using both the Library of Congress and Dewey Decimal systems.