Partly on account of Louisiana’s historic ties to the Caribbean, the book collections at Hill Memorial Library contain many titles related to Caribbean history, providing a useful resource for research and presentations.

The Rare Book Collection is strong in general histories and travel accounts dating from the seventeenth through the early nineteenth century. Many of these titles were acquired from Jules M. Burguières, Jr. (1882-1960), a leader of the sugar industry in Louisiana and Florida.

The Louisiana & Lower Mississippi Valley Collection is another valuable scholarly resource, particularly for researchers interested in the history of slavery and U.S.-Caribbean relations.

The McIlhenny Natural History Collection contains various titles related to the plant and animal life of the Caribbean islands. 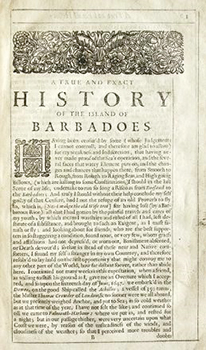 The earliest mention in LSU’s collections of the voyages and discoveries of Christopher Columbus is found in a 1541 edition of the Ptolemy’s Geographia, on the back of map 28; several other maps in the work relate partly or wholly to America.

Antonio de Herrera y Tordesillas’s Historia general, a chronicle of Spanish exploration from the time of Columbus to the 1550s, is available in three editions (1622, 1725, and 1726). Purchas his Pilgrimes (1625) and Joannes de Laet’s Novus orbis (1633) cover roughly the same time period while recording the explorations of other European nations.

Significant later works include Charles Leslie, A New History of Jamaica (1740); Edward Long, The History of Jamaica (1774); Pierre de Charlevoix, Histoire de l’Isle espagnole ou de S. Domingue (1730); and Richard Ligon, A True & Exact History of the Island of Barbadoes (1673), which contains some of the earliest descriptions and engravings of sugar mills.

Natural history, agriculture, and native cultures are focuses of many seventeenth- and eighteenth-century works. Charles de Rochefort, for example, in his Histoire naturelle et morale des iles Antilles de l'Amerique (1658, 1665, 1666), provides descriptions of plants and animals, a history of local Indian tribes, and a vocabulary of the Carib language. Sir Hans Sloane’s A Voyage to the Islands Madera, Barbados, Nieves, S. Christophers and Jamaica (1707-25) similarly describes local customs and the use of natural resources by native peoples. The Rare Book Collection contains several early editions of Jean Baptiste Labat’s Nouveau voyage aux isles de l'Amerique, including the 1722 first edition. Focusing on the French West Indies, Labat’s work includes descriptions of exotic flora and fauna along with crops such as sugar, indigo, and tobacco.

Bryan Edwards’ The History, Civil and Commercial, of the British Colonies in the West Indies (1793) is another important work. The second edition (1794) acknowledges the success of Captain William Bligh of H.M.S. Bounty fame in introducing breadfruit to the Caribbean. George Miller, The Traveller’s Guide to Madeira and the West Indies (1815), an eccentric journal originally kept in hieroglyphic form, describes local industries, such as sugar refining and rum distillation, and wildlife.

Mrs. A. C. Carmichael’s Domestic Manners and Social Condition of the White, Coloured, and Negro Population of the West Indies (1833) is a useful source for the study of daily life, food, dress, and leisure.

The Louisiana & Lower Mississippi Valley Collection (LLMVC) contains a number of scholarly works about refugees from the Haitian Revolution who settled in Louisiana between about 1792 and 1809. Limiting your catalog search to LLMVC and entering St. Domingue or Haiti as a subject or keyword term should locate the most relevant titles.

Most of the works discuss slavery and the slave trade. Naval surgeon John Atkins, in his A Voyage to Guinea, Brasil, and the West-Indies (1737), followed slave routes across the Atlantic. A Descriptive Account of the Island of Jamaica (1790), by William Beckford, son of a famous West India planter, reflects on the probable consequences of the abolition of slavery, while Journal of a West India Proprietor (1834), by Matthew Lewis, a writer of Gothic novels like Beckford, recounts his two visits in 1815 and 1817 to his father’s Jamaican sugar plantation, where he attempted to ameliorate the condition of slaves. In A Summer on the Borders of the Caribbean Sea (1860), J. Dennis Harris, a black writer, considers the possibility of resettling African Americans in places like Haiti, the Dominican Republic, and British Honduras to escape inequality and mistreatment in the United States.

The collection contains several works related to the Haitian Revolution. See, for example:

Although indirectly related to the Caribbean, John Gabriel Stedman’s Narrative of a Five Years’ Expedition against the Revolted Negroes of Surinam (1796), featuring iconic images by William Blake, had a strong impact on British opinion toward Caribbean slavery.

A few works relate to the American Revolution and Napoleonic Wars in the Caribbean, such as: 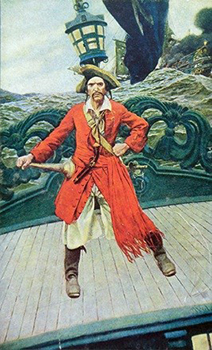 The English Hero, or Sir Francis Drake Reviv’d (1716) is a popular account of Drake’s attacks on Spanish settlements in the Caribbean in the late sixteenth century. England's Triumph over the Spaniards (1745?), originally published in 1590 shortly after the Spanish Armada, contains an account of Sir Henry Morgan’s raids on the Spanish Main.

Pirate narratives were frequently published in larger works. For example, one early account of Morgan may be found in Edward Vernon’s A New History of Jamaica (1740); likewise, “A Relation of a Voyage Made by the Sieur de Montauban,” a French pirate active in the Caribbean, was published in Henri de Tonti’s An Account of Monsieur de La Salle’s Last Expedition and Discoveries in North America (1698).

A New Voyage Around the World (1698-1703) is a three-volume account of the English explorer and buccaneer William Dampier. A related work is A New Voyage and Description of the Isthmus of America (1704) by Lionel Wafer, a buccaneer who had sailed with Dampier and preyed on the Spanish treasure fleets, and was later marooned in Panama. The Unfortunate Englishmen (1817), first published in 1735 by John Cockburn, tells the story of his capture, along with five other English sailors, by Spanish pirates, who marooned them on the coast of Honduras.

Also available is an eighteenth-century French edition of Histoire des aventuriers flibustiers (1774) by Alexandre Exquemelin, one of Henry Morgan’s companions; for a modern translation, see The Buccaneers of America. Histoire des pirates anglois (1725, 1726) is a French translation of Daniel Defoe’s A General History of the Pyrates. It includes chapters on the women pirates Mary Read and Anne Bonny. A similar work is Johann Wilhelm von Archenholtz’s Histoire des flibustiers (1804), a French translation of the German original.

The Pirates Own Book, or Authentic Narratives of the Lives, Exploits, and Executions of the Most Celebrated Sea Robbers (1844) contains vivid accounts of piracy in the Caribbean and elsewhere, as well as woodcuts, including a depiction of “walking the plank” and the iconic image of Captain Kidd hanging in chains. An Historical Sketch of Robin Hood and Captain Kidd (1853) contains a reprint of A Full Account of the Actions of the Late Famous Pyrate, Capt. Kidd, first published at the time of his trial and execution in 1701.

Other important works include James Burney’s History of the Buccaneers of America (1816), which covers the period from the European discovery of America to the early eighteenth century, and Aaron Smith’s The Atrocities of the Pirates (1824), an unromanticized look at piracy in the early nineteenth century.

Note that some of the general histories mentioned elsewhere in this guide also discuss the history of piracy. For a bibliography of early sources, see Philip Gosse’s My Pirate Library (1926) and the four-volume catalog Bibliotheca Nautica (1928; LSU Library).

Materials acquired from Jules M. Burguières include maps of Caribbean islands, most dating from the 17th, 18th, and 19th century. To locate maps in the library’s online catalog, do an Advanced Search, select “Special Collections” as library, and enter the word map along with a geographic descriptor in the keyword box.

One of the more notable Carribean-related items in the Rare Book Collection is an album containing 26 original graphite drawings on vellum by Noël Challe. Probably among the few surviving examples of book-related art from the colonial Caribbean, the drawings are believed to have been created between 1769 and 1772 in Saint-Domingue (present-day Haiti). Each numbered drawing depicts a scene from one of the twenty-four cantos of a poem on Christopher Columbus by Nicolas Louis Bourgeois. Only two of the 26 drawings appear in the published work, which is also held: Christophe Colomb, ou, l'Amérique découverte (1773).

Another interesting item is a set of cards which, when stood up and placed a short distance apart, create a three-dimensional view of an eighteenth-century Caribbean sugar plantation. 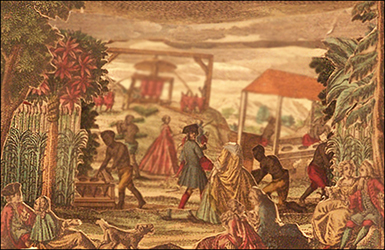 The Archivo General de Indias, Documentos... Audiencia de Santo Domingo, sobre la Epoca Española de Luisiana, or the “Santo Domingo Papers,” are housed in Special Collections. They are arranged according to legajo numbers. These microfilmed government documents date from 1757 to 1811 and may be used to study, among other things, immigration to Louisiana from St. Domingue / Haiti. A number of legajos from the papers have been summarized (in Spanish) and indexed in Documentos Relativos a la Independencia de Norteamérica existentes en Archivos Españoles.