The historical controversies surrounding slavery in the United States, Europe, and the Caribbean are documented by a wide range of printed materials in LSU Libraries Special Collections.

In addition to general works about slavery, the Rare Book Collection is strong in materials on the abolition of the British slave trade. The Louisiana & Lower Mississippi Valley Collection contains a wide selection of both antislavery and proslavery literature, reflecting attitudes toward slavery not just in Louisiana, but in the U.S. as a whole.

Another available resource is the Judge Warren L. Jones Lincoln Collection, an extensive collection of mostly twentieth-century books and pamphlets on the Great Emancipator.

Warning: Literature about slavery, whether pro- or anti-, can be quite graphic and disturbing to even the most hardened reader. Writers of the period often used detailed descriptions of atrocities to elicit strong emotional reactions in their audience, and these depictions still have the ability to stir strong emotions even 150 years later. Please be advised and prepare yourself (as best you are able) before delving deeply.

Works in the Rare Book Collection by British abolitionists include those of Thomas Clarkson, William Wilberforce, Henry Brougham, George Thompson, William Dickson, and James Ramsay. A highlight of the collection is Letters of the Late Ignatius Sancho, An African (1782), by a well-known London litterateur who symbolized Africans' potential.

Writings by Quaker antislavery activists range from works by eighteenth-century American authors such as John Woolman and Anthony Benezet to later works by British Quakers like Joseph Sturge, author of The West Indies in 1837. James Cropper’s Letters Addressed to William Wilberforce is a presentation copy from Cropper to Quaker abolitionist Isaac Hadwen, a friend of Thomas Clarkson. 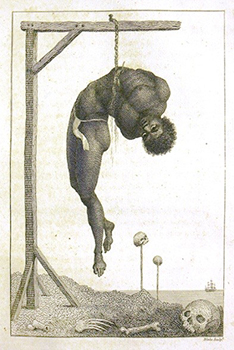 Antislavery pamphlets and parliamentary acts and speeches are complemented by travel literature and other accounts of slave life in the Caribbean. Examples of such works include:

Several accounts by British authors were written to persuade Americans to abolish slavery. One such work is Joseph John Gurney’s Familiar Letters to Henry Clay of Kentucky, Describing a Winter in the West Indies (1840). Journal of a Residence on a Georgian Plantation in 1838-1839 (1863), by the British actress Fanny Kemble, had a strong influence on Northern opinion when it was published during the Civil War.

The library’s holdings of British materials on slavery are written chiefly from the antislavery viewpoint. A few proslavery items are available, including collections of parliamentary reports on issues such as compensated emancipation. The Edinburgh Review and the West Indies (1816) attacks antislavery sentiment in the British press as well as writers like Zachariah Macaulay and James Stephen. Two related items are Alexander Barclay’s A Practical View of the Present State of Slavery in the West Indies (1827) and Charles Telfair’s Some Account of the State of Slavery at Mauritius (1830), both written to refute abolitionists’ accounts of life in Britain’s slave colonies.

Among works written from the antislavery perspective by American journalists are:

Works by Southern authors include Hinton Helper’s The Impending Crisis of the South (1857) and Angelina Grimké’s An Appeal to the Christian Women of the South (1836), thought to be the only written appeal for the abolition of slavery made by a Southern woman to other women. Cassius Clay’s Writings (1848) and James Birney’s The American Churches, the Bulwarks of American Slavery (1842) are two works by Kentucky abolitionists who published antislavery newspapers in Ohio. A related item of interest is Edward Beecher’s Narrative of Riots at Alton (1838), an account of the murder of Illinois abolitionist printer Elijah P. Lovejoy and the destruction of his press by a proslavery mob from Missouri. 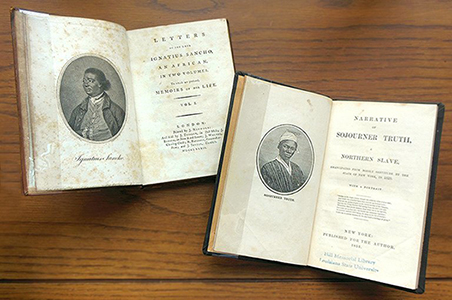 In the category of slave narratives are such classics as:

As well as the first edition of each of Frederick Douglass's autobiographies:

(Note that Douglass' final autobiography was a revision of a previous edition issued in 1881, leading some scholars to call the 1892 edition the fourth such autobiography.)

Charles Emery Stevens’s biography Anthony Burns (1856) is inscribed by Burns, a runaway slave whose capture and trial tested the enforceability of the Fugitive Slave Law. Another interesting association copy is the Memoir of Pierre Toussaint (1854), which was owned by George A. Crocker, a member of the Boston-based Kansas Aid Committee, formed in 1856 to supply free-state settlers in Kansas.

Rev. William Mitchell, a fugitive slave, wrote about his escape to Ontario in The Under-Ground Railroad (1860). Another Canada-related item is A Few Remains of the Rev. James MacGregor (1859), which contains works by an early Canadian antislavery activist, including “Letter to a Clergyman Urging Him to Set Free a Black Girl Held in Slavery,” first published in Nova Scotia in 1788.

Invasion at Harper’s Ferry (1860) is the official Senate report of John Brown’s attack on the federal arsenal. Brown’s first biography, The Public Life of Capt. John Brown (1860) by James Redpath, who interviewed Brown in Kansas, is also held. Henry David Thoreau’s A Yankee in Canada, with Anti-Slavery and Reform Papers (1866), contains two essays on Brown. Of related interest is Prison Life and Reflections (1847) by George Thompson, one of the first white men to risk his life and suffer imprisonment to set slaves free.

Abigail Mott’s Biographical Sketches and Interesting Anecdotes of Persons of Colour (1826) and William Wells Brown’s The Black Man (1863), published in Georgia during the Civil War, contain biographical sketches partly intended to present evidence of the intelligence and humanity of Africans.

A few items relate to children and families. See, for example:

General histories of slavery that attempted to justify it include:

Jacob D. Wheeler’s A Practical Treatise on the Law of Slavery (1837) is a discussion of court decisions on slavery-related cases. Cotton is King (1860), an extensive anthology of essays, examines topics such as the Dred Scott case, the Fugitive Slave Law, and “Slavery in the Light of International Law.” Some works discuss slavery in the context of American capitalism. In Cannibals All!, or Slaves without Masters (1857), for example, George Fitzhugh argues that the plantation system is preferable to Northern industrial society, where white workers were slaves in all but name. J. D. B. DeBow, an influential promoter of southern industry, made similar arguments in The Interest in Slavery of the Southern Non-Slave-Holder (1860).

Political speeches largely focus on the expansion of slavery into the West. Proslavery works on this topic include Speech of Mr. Davis, of Mississippi, on the Subject of Slavery in the Territories (1850), Albert Gallatin Brown’s The Slave Question (1850), and Speech of Hon. J. P. Benjamin, of La., on the Kansas Question (1856). Of related interest are materials on William Walker and the Southern filibustering movement in Central America.

Apologies for slavery by American clergymen include works by Frederick A. Ross, Iveson Brookes, and Thornton Stringfellow. For similar publications, see:

Among controversial scientific writings on ethnology and race theory are works by Josiah C. Nott, George R. Gliddon, John Bachman, and Rev. Thomas Smyth. John Campbell’s Negro-Mania (1851) is a compendium of anti-black writings by European and American scholars, including scientists. Such arguments were repeated for a popular audience by Dr. John H. Van Evrie in Negroes and Negro “Slavery” (1861).

Two travel accounts by Northern apologists for slavery are David Brown’s The Planter, or Thirteen Years in the South (1853) and Nehemiah Adams’s A South-Side View of Slavery (1855). A similar work, Curiosity Visits to Southern Plantations (1863), by “A Northern Man,” was intended to sway British opinion in the South’s favor. Three Letters by “Conestoga” to a Friend in Lancaster County, Pennsylvania, upon Slavery and the Fugitive Law (1851) is a rare pamphlet containing letters from a Northern-born Mississippi planter, who compares slave life with life in the free states and Great Britain.

While the publication of abolitionist literature ended with the Civil War, the political and legal fights over Reconstruction continued to generate a large body of texts after its close. Some of this work was focused on understanding the War that had just concluded and the reintegration of the South that was currently underway, while other writers engaged in the actively revisionist work of Southern propaganda.

Beginning almost immediately after the end of the Civil War there was an active and conscious attempt by white southerners to re-frame the war as a noble battle of self-defense in the name of states' rights. So-called 'Lost Cause' literature took the form of both highly partisan histories as well as works of fiction that romanticized the Southern way of life. These sentiments extended long after the formal end of Reconstruction in 1877.

Available examples of antislavery fiction include:

Literary works by black authors on the subject of slavery include Juan Francisco Manzano’s Poems by a Slave in the Island of Cuba, Recently Liberated (1840) and George Moses Horton’s Poems by a Slave, published as part of Memoir and Poems of Phillis Wheatley (1838). John Greenleaf Whittier’s Poems Written during the Progress of the Abolition Question in the United States (1837), William Henry Burleigh’s Poems (1841), and George Thompson’s The Prison Bard, or, Poems on Various Subjects (1848) are notable examples of antislavery poetry by white authors. The Liberty Minstrel (1845) is an anthology of antislavery songs.

In contrast to the above is fiction and poetry written in defense of slavery. Several “anti-Tom” novels (responses to Harriet Beecher Stowe’s Uncle Tom’s Cabin) are available:

Although not defenses of slavery, Sarah Josepha Hale’s Liberia, or Mr. Peyton’s Experiments (1853) and Bayard Hill’s Frank Freeman’s Barber Shop (1852), portray ex-slaves’ miserable life in the North in an attempt to justify the work of the American Colonization Society. Of related interest are two critical essays on Stowe’s novel: Edward J. Stearns’s Notes on Uncle Tom’s Cabin (1853) and Edward Pringle’s Slavery in the Southern States (1852).

The Hireling and the Slave, Chicora, and Other Poems (1856) by William John Grayson is the library’s most notable example of proslavery poetry.

Reports of several colonization societies are available. Those of the London-based African Institution (1807-17) contain information on the organization’s efforts to improve living conditions in Sierra Leone. The African Repository (1825-92) is the publication of the controversial American Colonization Society; a few issues are from the library of Daniel Turnbull, a prominent Louisiana planter and member of the ACS.

Other journals include thirteen issues of the Anti-Slavery Record (1835- 37), a source for popular images of slavery. Fifty articles originally published in the Pennsylvania Freeman and the National Anti-Slavery Standard are reprinted in The Anti-Slavery Papers of James Russell Lowell (1902). Perhaps the rarest journal in the library’s collection is The Anti-Conspirator, or Infidelity Unmasked (1831-32), published in Cincinnati by Dyer Burgess, a Presbyterian minister who connected slavery with what he saw as a Masonic conspiracy to destroy democracy.

Scattered issues of the Radical Abolitionist, Frederick Douglass’ Paper, The Emancipator, and the New York Colonization Journal—some of which were owned by Mississippi planter and secessionist John Quitman—are part of the Lemuel Parker Conner Family Papers (stacks location: Range 98:C).

Periodicals that published literary, political, and religious defenses of slavery include DeBow’s Review (1850-69) and the Southern Literary Messenger (1835-64). Two issues of J. W. Hedenberg’s The African, a rare proslavery journal published in St. Louis in 1843, are held. The copies belonged to Daniel Turnbull, a prominent Louisiana planter and member of the American Colonization Society.

The library’s manuscript collections are a rich source for the study of slavery and its impact on Louisiana, the United States, and the world. See the manuscript subject guides on the library’s website for listings of available materials on topics such as African Americans, the Civil War, plantations, and sugar. The Palfrey Family Papers contain correspondence of Massachusetts antislavery activist John Gorham Palfrey. Individual letters by prominent abolitionists include letters by William Lloyd Garrison, James G. Birney, and Charles Sumner.

See also the research guide to History for a general introduction to historical resources available in the LSU Libraries.

Searching the catalog using the following subject headings will locate the most relevant materials: