Some printed items are part of the LLMVC Ephemera Collection; they are listed by item title, with a link to the catalog record for the larger collection.
*Denotes unprocessed collection; see Notes & Tips tab for information on accessing unprocessed manuscript collections and oral history interviews.

The year 2020 marks the centennial of the passage of the 19th Amendment, establishing woman suffrage in the United States. Louisiana did not ratify the amendment until 1970, though the law was in effect as of August 1920. Supporters of suffrage argued that the state should make this determination, not the federal government.

LSU Libraries Special Collections maintains holdings related to the push for, and against, woman suffrage from as early as the 17th century.

20th Century: 19th Amendment and Beyond 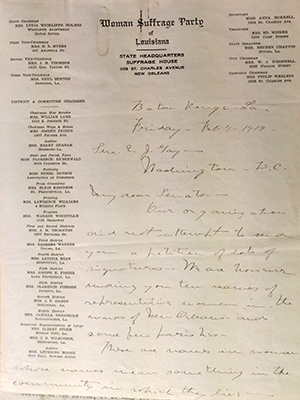 Letter to Senator Edward J. Gay III from the Woman Suffrage Party of Louisiana urging his support for women's suffrage, 1917