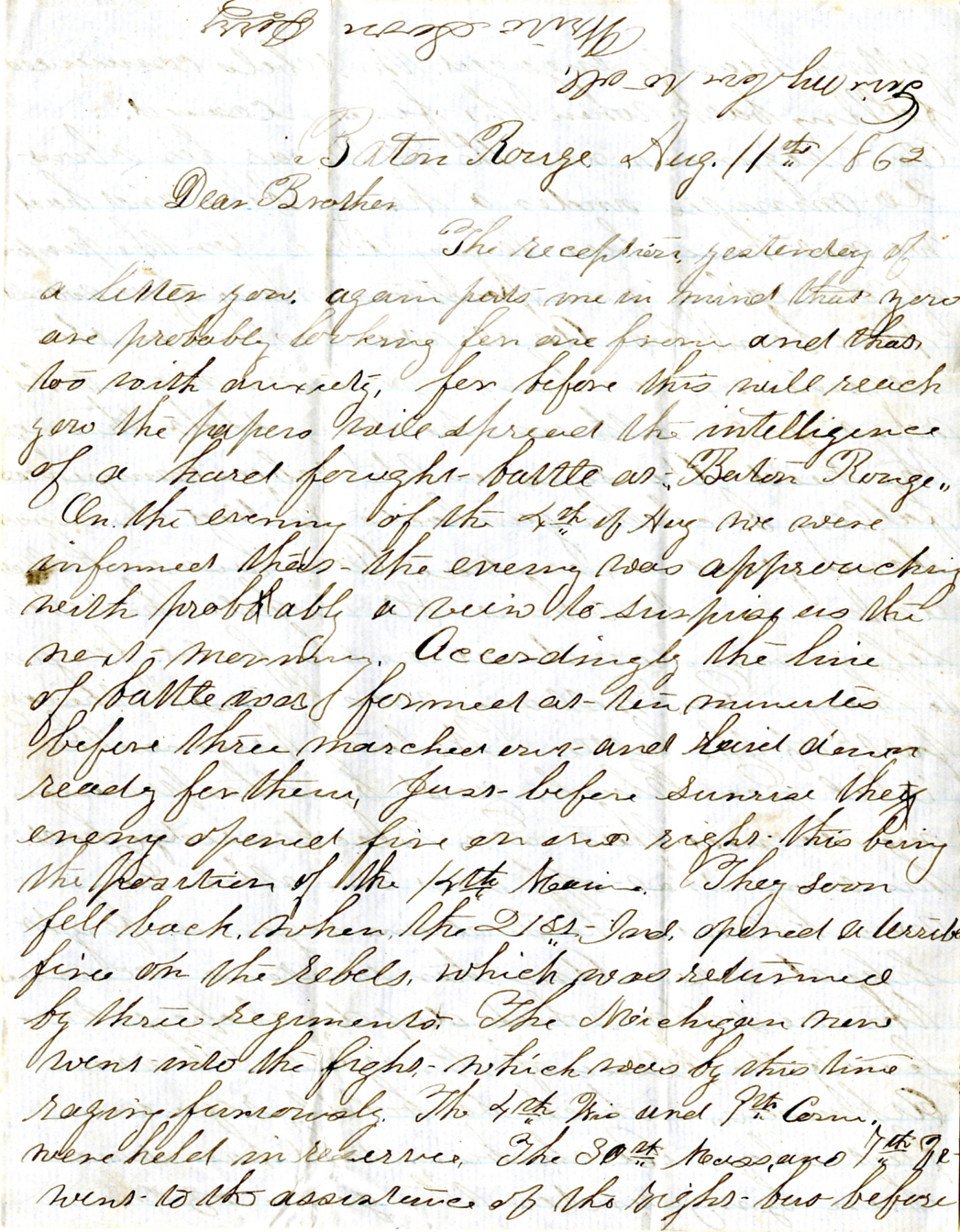 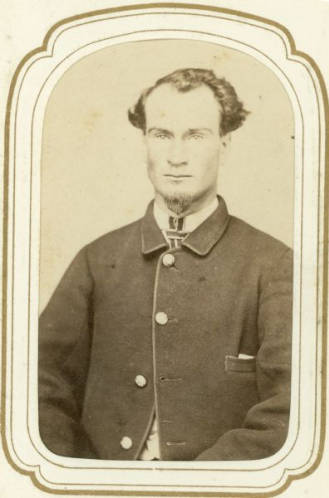 surprise us the next morning.  Accordingly the line of battle was formed at ten minutes before three, marched out and laid down ready for them.  Just before sunrise they enemy opened fire on our right – this being the practice of the 14th Maine.  They soon fell back, when, the 21st Ind. opened a terrible fire on the rebels, which was returned by three regiments.  The Michigan men went into the fight – which was by this time raging furiously.  The 4th Wis. and 9th Conn. were held in reserve.  The 30th Mass. and 7th Vermont – to the assistance of the right – but before getting heavily engaged, the rebels commenced falling back when the firing ceased.  Our regiment and the 9th was for about 20 minutes under a heavy fire and had we not have been laying down for the purpose of concealing our position many of us would have been hit.

As it was no one in the regiment was hurt, except a negro who was out with us he being shot through the head.  As soon as the rebels commenced falling aback the gunboats shelled the woods doing great execution.  Our loss in killed amounted to about 80 while the rebels left over 200 dead on the field for us to bury.  Gen. Williams was killed in the early part of the battle.  We took prisoner the rebel Gen. Clark, and by other prisoners we learned that Gen. Breckenridge had his arm shot off, and one other Gen. was killed. The Indiana regiment fought like devils.

Another instance occurred the next day which det developed more fully the plans of the rebels.  The ram “Arkansas” which so boldly ran our fleet above Vicksburg, and has since been lying under the guns of that place, came down to attack our gunboats at the same time they made the attack by land but finding the battle was over she stopped up round the point.  Our boats not liking to have her so near, the Essex went up and sent a shot against the ram which didn’t hurt her a bit.  The ram then fired a shot at the Essex which didn’t do her any harm.  The Essex then sent a eleven inch shell into the port hole of the ram which set he on fire and blowed her up.  So we shall not be troubled any more with that thing."

"This town, with its ten thousand soldiers, is more quiet than it was with the old population of seven thousand citizens. With this tremendous addition, it is like a graveyard in its quiet, at times. These poor soldiers are dying awfully. Thirteen went yesterday."

"Ever since I commenced to write, the sound of a furious bombardment has been ringing in my ears; and beyond an occasional run to see the shells fly through the air (their white smoke, rather) I have not said a word of it. The girls have all crowded on the little balcony up here, towards town, and their shrieks of "There it goes!" "Listen!" "Look at them!" rise above the sound of the cannon, and occasionally draw me out, too. But I sit here listening, and wonder which report precedes the knocking down of our home; which shell is killing some one I know and love.

These loud cannon make me heartsick, and yet I am so excited! How rapidly they answer each other! I am told the attack commenced at five this morning, and lasted three hours. Those girls are shouting that Baton Rouge must be on fire, from the volume of smoke in that direction. How they scream as the balls go up, to show it to each other. I think I'll take a look, too."

"We went on until we came in sight of Baton Rouge. There it stood, looking so beautiful against the black, lowering sky that I could not but regret its fate.

It was late before we got home, and then we had great fun in watching shells which we could dimly trace against the clouds, falling in what must have been the Garrison. Then came a tremendous fire, above, which may have been a boat -- I don't know.

I hear a tremendous firing again, and from the two volumes of smoke, should judge it was the Arkansas and the Essex trying their strength at a distance. We are going down to see what's the fun. It would be absurd to record all the rumors that have reached us, since we can rely on none. They say we fought up to nine last night, and occupied the Garrison for five minutes, when the shells forced us to abandon it. Also that four regiments laid down their arms, that the Federals were pursued by our men to the river, driven to the gunboats, and pushed off to prevent the Western men from coming aboard. An eye-witness, from this side, reports that General Williams, "they say," was forcibly held before a cannon and blown to pieces. For the sake of humanity, I hope this is false.

...We stood with our new friends on the levee watching the last of the Arkansas, and saw the Essex, and two gunboats crowded with men, cautiously turn the point, and watch her burn. What made me furious was the thought of the glowing accounts they would give of their "capture of the Arkansas!!!" Capture, and they fired a shot apiece! -- for all the firing we heard was the discharge of her guns by the flames. We saw them go back as cautiously, and I was furious, knowing the accounts they would publish of what we ourselves had destroyed. We had seen many shells explode, and one magazine, and would have waited for the other, if the clouds had not threatened rain speedily. But we had to leave her a mere wreck, still burning, and started off on our long walk."

"It is now midday, and again we hear firing; but have yet to learn the true story of the first day's fight. Preserve me from the country in such stirring days! We might as well be in Europe as to have the Mississippi between us and town."