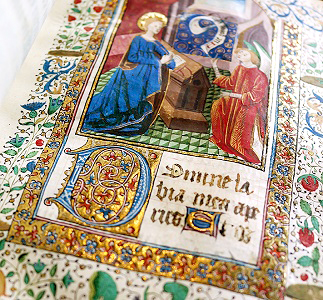 We usually think of books as collections of words that tell a story. For most of us, whether we get that story in a rare first edition, a later Penguin paperback edition, or online doesn't really matter. It's the story that counts. But when we pay close attention to the physical characteristics of books, alternative stories sometimes emerge.

In this activity, students are asked to treat books like artifacts in a museum and think carefully about the question of categorization. In other words, historical objects often wear multiple hats. Consider the fact that depending on what kind of a museum an object is in, it can appear very different. For example, an illustration of an egret from John James Audubon's Birds of America, if displayed in the LSU Museum of Natural Science, would likely be discussed in the context of a particular ecosystem or family of birds. If displayed in the LSU Textile and Costume Museum, however, it would probably be used to tell the story of how egrets were hunted to the verge of extinction in the nineteenth century to provide feathers for ladies' hats. A museum of women's history, alternatively, might use the illustration to talk about Boston socialite Harriet Hemenway, who was so outraged by the killing of birds in the name of fashion that she organized a boycott of the feather trade, helping to lay the foundation of the modern wildlife conservation and environmental protest movements. Though rare books and archival materials must remain in the library, we can move them from one "museum" to another with our imaginations and think about how they might tell a different story if viewed in a different context.

Re-imagining objects in this way can raise new questions and insights. In 2013, four Harvard University Teaching Fellows created the short video "This Is Not A Chair," shown below. Originally featured in the online course Tangible Things, taught by historian Laurel Thatcher Ulrich and curator Sarah Anne Carter, the video discusses several historical American chairs, observing that they are not simply pieces of furniture, but portals to history. Rare books can be approached in the same way, as outlined in this activity.

This activity will train students to:

The main purpose of this activity is to train students to see historical objects at more than face value. Literally any books, no matter how mundane, can be used.

Have your students watch the "This Is Not A Chair" video on YouTube. Then give them a book and ask them to focus primarily on its physical characteristics rather than its text. Based on those characteristics, how does the book provide insight into something other than the most obvious topic? Have students report their ideas in a short presentation or essay.

Adaptation: Name an academic discipline (such as art, anthropology, biology, history of medicine, history of technology, etc.) and ask your students to pretend they are a curator in a museum that focuses on that area. How would they use the sources you have identified? How would they write an interpretive label for visitors?

This is not a prayer book. Well, it’s not only a prayer book. It’s also a cow. This Book of Hours dates from about 1450 and was written on vellum, a smooth, highly durable writing surface made from the skin of a calf or other animal. In the Middle Ages, people would have found it hard to live without animals, which supplied not only food and (quite literally) horsepower, but also valuable trade goods like wool, furs, leather, and vellum. So, in a sense, this is not a book. It’s the beginning of a discussion about the medieval economy. It also tells us about trade networks six centuries ago. See that beautiful blue on the Virgin Mary’s dress? Take a guess where the artist got the pigment needed to make it. If you guessed Afghanistan, you’re right! Medieval blue paint was made from lapis lazuli, a mineral found almost nowhere outside Afghanistan, which to fifteenth-century Europeans must have seemed as far away as the moon. Although travel was definitely a lot slower in the Middle Ages, if you think the global economy is a modern invention, this nearly 600-year-old book is telling you to think again. This is not a book. It’s a record of human connections.

This is not a prayer book. Well, it's not only a prayer book. It's also a statement of power. When the book was published in 1717, England's monarch, King George I, had been on the throne for just three years, following the death of his distant cousin, Queen Anne. Although at least fifty people were more closely related to Anne, all of them were Catholics and therefore ineligible to take the throne because of a law, known as the Act of Settlement, passed by Parliament in 1701. George, a minor German prince who didn't even speak English, was Anne's closest Protestant relative. Concerned that he would not be accepted by the British public, the king's ministers used art to advertise his commitment not only to his duties as a temporal monarch, but also as Protector of the Faith. At the beginning of this edition of the Book of Common Prayer, a portrait of the king is included. Engraved in tiny letters across the king's face are the words of the Lord's Prayer, the Ten Commandments, and the 21st Psalm. The message was: George will not only defend the Church of England, he is the Church of England. The entire book, in fact, is engraved rather than printed with moveable type, which made it an extremely expensive undertaking. The publisher, John Sturt, dedicated the book to the Prince and Princess of Wales, indicating the power of the royal family to grant patronage and, by extension, wealth and advancement.

This is not a book of poetry. Well, it's not only a book of poetry. It's also a victim of the Inquisition. Printed in 1552, this copy of Petrarch’s sonnets came under the eyes of censors in 1595. In three of the sonnets, Petrarch criticizes the papacy for its decadence. Even though the poet died in 1374, long before the Reformation, two centuries later Church officials were afraid his words would be used by Protestant propagandists. As a precaution, Pope Clement VIII banned the offending sonnets. Printers were ordered to omit them from future editions of Petrarch’s works. Owners of existing editions had to cross out or paste a strip of paper over the sonnets. Did readers comply? Some did, as we learn from this book now at LSU. Others defied the ban. At least one person found a censored copy and wrote the sonnets back in, by hand, on blank pages (see this copy digitized by Yale). Studied side by side as unique artifacts, these books are far more than collections of poetry. They tell the story of the Reformation and the even larger story of intellectual freedom, public debate, and the free circulation of ideas.

In class, or as part of your students' presentations or essays, ask them to talk about how their book might appear different if viewed in a digital library. What physical aspects of the book (such as size, shape, paper quality, binding, etc.) can only be experienced or fully understood by having it physically in front of you ? Are there any unique aspects of the book, like inscriptions or annotations, that are absent in digital copies? How do those change your interpretation of the book, if at all? What do the digital surrogates NOT convey?