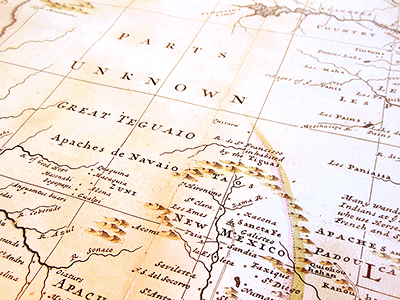 In his classic essay "Deconstructing the Map," Professor J. B. Harley argued that despite claims to objectivity and pure science, cartography always has a hidden agenda. "Sometimes agents of change, [maps] can equally become conservative documents. But in either case, the map is never neutral." Though map consumers and even mapmakers themselves seldom realize it, Harley observed, maps reflect social hierarchies and cultural norms. Every map was made by someone who decided what to include, omit, or prioritize; those editorial choices were consciously or subconsciously influenced by social conditioning. Map projections—such as the "racist" Mercator projection, which makes Europe and North America look disproportionately large—can be read as a form of propaganda, while maps from all time periods and cultures follow what Harley called the "rule of ethnocentricity." Harley also argued that the margins of maps are filled with subliminal messages that reinforce or resist the status quo. Cartouches, title pages, and other decorative elements, for example, convey cultural meaning. While some scholars have suggested Harley took maps too seriously, all agree that maps have rhetorical power. If we are to fully understand a map's story, we must read between its lines.

This exercise uses three eighteenth-century maps of North America to improve students’ ability to view historical objects at more than face value. Maps work especially well for teaching "close-looking" skills because they cannot be read quickly in a linear way like a book or letter, nor have their makers provided much explanatory text. Maps demand patience and independent thinking. They challenge students to focus their attention, hunt for similarities and differences, and then form their own hypotheses.

This activity will teach students to:

Have your students visit the Special Collections Reading Room on their own, or gather into small groups in class if time allows, and ask them to closely examine the following maps:

Select from the following questions or create your own to guide the students as they explore the maps:

1.)  In 1718, France’s leading cartographer, Guillaume Delisle, published a new map of North America. It portrayed Louisiana as a vast colony taking up most of the continent. What the map does not indicate, however, is that in 1718, fewer than 1,000 Frenchmen lived in all of Louisiana. Looking at Delisle’s map, how has he exaggerated Louisiana’s importance and created a work of political propaganda.

2.)  Delisle’s map angered Britain and Spain because it included within the boundaries of Louisiana territories claimed and even settled by these countries. In 1721, the English cartographer John Senex published an adaptation of Delisle’s map that reasserted British claims. Comparing the two maps, identify some of Senex’s changes. What territory is now shown as British? What important French settlement did Senex omit?

3.)  Despite its pro-British stance, how does Senex’s map contradict the idea that the British were outraged at being nearly pushed off Delisle’s map? How has Senex further minimized the presence of Britain’s colonies?

5.)  In the cartouche on Senex’s map, he dedicates the map to William Law, brother of John Law, a Scottish-born financier based in France who encouraged investment in Louisiana and led the disastrous speculative frenzy known as the Mississippi Bubble. Read this short article about John Law and the Mississippi Bubble. Does knowing something about the background behind the cartouche change your perception of Senex’s map? Why do you think the map was produced? Who would have been interested in it?

6.)  Study the cartouche to Senex’s map even more closely. Two of the allegorical figures, known as putti, hold cornucopias. What do cornucopias signify? What are the ones on Senex's map filled with? The other two putti are shown working in a mine. Can you connect this part of the image to the map and explain what it means? What do you think the significance of allegory and map cartouches was in the eighteenth century?

7.)  Give an example of how Delisle’s map tries to convey an image of scientific objectivity.

8.)  What is a standard scientific feature of maps that Delisle did not include on his map but that Senex added to his?  Judging from its absence on Delisle’s map, how do you think the map was intended to be used? Why might Senex have added it to his version of the map (keeping in mind its connection to the Mississippi Bubble)?

9.)  What traditionally French symbols did Delisle include on his map? (Hint: think about a Louisiana football team and the nickname for the person Louisiana is named after.) Were these included on Senex’s adaptation?

10.)  How do these maps portray the conquest of North America? Can you find evidence of warfare with Native Americans? What kinds of place names do you see?

11.)  Find one or more examples of how these maps reflect the social hierarchy in the eighteenth century. What is something on the maps that was named after a monarch?  Bonus points: In eighteenth-century France, information was tightly controlled by the government, with the ability to publish being considered a privilege granted by the king. Can you find evidence of this on Delisle’s map? How is Senex’s map different and why?

12.)  Can you find something that shows how the maps reflect the church’s role in society?

13.)  What voices are not represented on these maps?

14.)  What is the oldest capital city in the United States? Find it on one of these maps. What colony was it part of? How does that make you think differently about the story of American expansion?

15.)  Take a look at the colored picture in the top left corner of Moll’s map, depicting the Susquehannock Indian fort in Pennsylvania. Located in territory claimed by the French, the fort had been captured by the Iroquois. As the British considered the Iroquois to be under their protection, the image of the fort could be seen as advertising British ownership of a contested area and symbolizing the importance of Indian allies in colonial power struggles. Does this interpretation change your perception of the presence of Native Americans on these maps? Are they portrayed as neighbors and equals or as potential subjects and pawns in the game of empire?

16.)  Do you think Moll sanitized his map in any way? Compare it to Senex’s map and look for examples of how he might have used language to make the interior of North America seem more attractive to settlers, speculators, or political leaders. (Hint: look at the Ohio Valley and the area where Houston is today.)

17.)  How do you think these maps were used originally?  Who might have used them?  Explain your hypothesis based on the physical characteristics of the maps.

18.)  What didn't you learn through close looking?

Daniel Strebe, "The Impotence of Maps, or Deconstructing the Deconstruction of their Construction," Cartographic Perspectives (Issue 73, 2012).